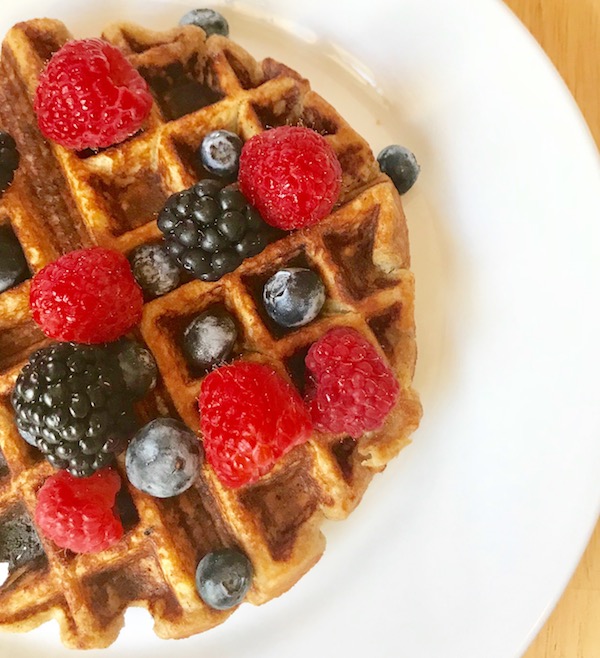 I woke up this morning not really in the mood to go on a run, but as I was logging my workout yesterday, I realized I’m currently on a two week running streak, and I didn’t want to break it. So alas, I loaded the jogging stroller into the car and headed for the park with my son.

I’ll never complain about a jogging stroller because being able to workout with my kid is the best thing ever; however, I normally only use it for short-ish runs because he gets sick of sitting in the stroller after a while, and pushing 50 pounds of weight on a run adds an undesirable dimension to the workout to say the least.

One lap around the lake was the plan, but as I was finishing up the first lap, a lady walking towards us from the opposite direction smiled at me and said, “Good work, girl!” I don’t know why, but that small comment from a stranger inspired me enough to keep running. How could I stop when someone just told me I was doing awesome? So I doubled the length of my originally intended run. From that moment when I decided to push myself a little further, this was bound to be a good day, and it was.

The sun was shining, my run was over, and I got to go to the gym and the pool with my family when my husband got home from work. The only thing that could make this Thursday better was waffles, so waffles we made. And they were sooooo yummy.

Regular waffles are pretty indulgent and are reserved for a weekend treat, BUT these were healthy waffles made from sweet potatoes and almond flour, and they were JUST AS DELICIOUS as weekend waffles! I know that’s hard to believe, but it’s true. Guilt free, out of this world waffles 🙂

As soon as I realized I wanted waffles for dinner, I threw a couple of sweet potatoes I had in the oven and let them cook at 400 degrees for 35-40 minutes until they were nice and soft. This was in the afternoon so I had plenty of time until dinner. If you’re under a time crunch, just cook your sweet potatoes in the microwave.

Once fully cooked, I peeled off the skin and mashed them.

When I was ready to eat in the evening, I started by combining my dry ingredients: almond flour, corn starch, sugar, baking powder, salt, and cinnamon. I whisked them to combine.

Next, in a separate bowl, I combined my wet ingredients: eggs, mashed sweet potato, honey, coconut oil, and milk, and I whisked to combine.

Then I added my wet ingredients to my dry ingredients and stirred gently. There are two important things to remember when making waffle batter:
1. Don’t overmix.
2. Let the batter sit for at least 10 minutes before putting in the waffle iron.

Preheat your waffle iron, and after ten minutes of letting your batter rest, scoop the batter into your waffle iron and cook as you would a normal waffle. I always put mine on the highest setting because I like a crispier waffle.

Top your waffle with whatever you’d like! We used fresh berries and whipped cream, maple syrup, and a sprinkling of powdered sugar.

Double the recipe to have leftovers!