Pork Chili Verde is one of my favorite weeknight dinners, period. When I discovered it, it was such a refreshing change from chili or pot roast in the slow cooker and really opened my eyes to what I can do with my crock pot. And I don’t know about you, but as a working mom, I’m ALWAYS looking for a great slow cooker recipe.

This is also one of the BEST freezer meals because you can make a giant pot (I’m talking slow cooker filled to the brim), have it for dinner, and then put the rest in freezer bags for 2-3 more future dinners, and that’s exactly what I do every time I make this recipe.

The freshness of the recipe is one of my favorite things. So many slow cooker recipes are heavy and make us think of the fall and winter, but this one is so light and vibrant and refreshing that it’s perfect for any time of year. My husband and I eat it in a bowl topped with melted Monterey jack cheese and tortilla chips (with some guacamole on the side!). You could also serve it over rice.

Oh yeah, it’s also one of those dinners that tastes even better the longer you let the flavors meld with one another. That’s why I often think the ones from the freezer are even better than the first night!

Making this recipe is super simple, though it isn’t just a “slow cooker dump” recipe. There is a little bit more prep involved because you’re going to use fresh ingredients.

Start with a pack of boneless top roasting pork (about 3-4 pounds). In my grocery store these often have a net around them, and go on sale all the time. I buy them when they’re on sale and freeze them until I’m ready to use them. You can also use a bigger piece of pork with the bone; however, I find the boneless is cheaper and takes less time to cook, so that’s my go to cut of meat.

Put the pork in your slow cooker with water, apple cider vinegar. Mix your brown sugar, cumin, chili powder, salt, and pepper together, then rub into the pork the way you would a dry rub. Turn the slow cooker on high, and allow the pork to cook until it shreds easily. This should take less than four hours.

To prepare your verde sauce, begin by laying your tomatillos (fresh or canned) and all of your peppers on a baking sheet.

Broil for about 5 minutes until the outsides begin to char. Then remove from the oven and place in a large blender or food processor. Add oregano, cilantro, and salt to the blender as well, and blend on high for about 30 seconds.

In a medium saucepan on the stove, add olive oil, garlic, diced onions, and a little bit of salt and pepper and allow to cook over medium heat until onions are tender.

Now the last step! Once the pork is tender, shred the entire pork loin. Drain all of the juices from the crock pot so that all that remains is the shredded pork. Add the green verde sauce from the blender, the onions and garlic from the stovetop, the cans of black or pinto beans, and the chicken stock. Turn the slow cooker on low and allow to simmer for a few hours. Before serving, taste to see if you need to add more salt (though I never need to). 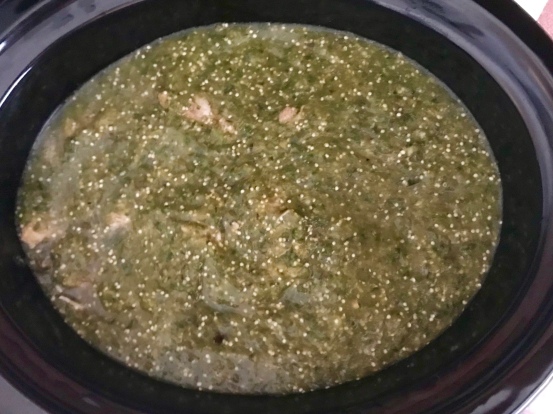 1. Mix salt, cumin, chili powder, and pepper in small bowl and rub onto pork. Place pork in slow cooker with water and apple cider vinegar on high until pork is fully cooked and shreds easily (less than 4 hours).
2. Cut jalapenos, poblanos, and chiles so they do not have the stems or seeds. Place on a large baking sheet with tomatillos and broil for 5 minutes until the outsides begin to char. Remove from the oven and transfer to a blender or food processor. Add the cilantro, oregano, and salt, and blend on high for 30 seconds.
3. Saute onions and garlic over medium heat until onions are tender.
4. When pork shreds easily, drain the juices from the slow cooker so the pork is all that remains. Add the verde sauce from the blender, the onions and garlic from the stove, beans, and the chicken stock to the slow cooker. Turn on low and allow to simmer for a couple of hours.
5. Serve in a bowl with Monterey Jack (or another good melting cheese) and tortilla chips or over rice. Allow the leftovers to cook before placing in a freezer bag.