I was so grateful for this past weekend because all three members of my little family were finally healthy (we’ve all been fighting a nasty cold/virus for the past three weeks), so I didn’t want to sit at home yesterday. After running my usual Sunday errands, the weather was so perfect we decided to head to the park to go for a run with the jogging stroller and then let my son play on the playground for a while. This of course meant there wasn’t very much time for weekly meal prep yesterday like I normally try to do on Sundays.

Luckily for days like yesterday when you just don’t have time to meal prep, there is the slow cooker. It’s one of my favorite kitchen appliances- I don’t have an Instant Pot yet so I can’t compare, but the slow cooker has saved my family from endless fast food dinners we could have otherwise consumed.

My husband and I both pack our lunches to take to work, and we like to have a protein with vegetables and sweet potatoes. We’ve had chicken the past couple of weeks, so I decided to make a giant (and I mean giant!) pot of vegetable beef soup this week that we could divvy up in Tupperware for lunches. I made a couple of changes from traditional vegetable beef soup: I traded out regular potatoes for sweet potatoes and went with lima beans instead of green beans or peas because my husband doesn’t like either of them.

This soup is so easy- aside from browning the meat which takes less than 5 minutes, it’s literally a “dump everything in and turn it on” kind of recipe, which we all know is the BEST slow cooker recipe.

It’s important to brown the meat because it seals in the flavor. I do this by melting butter in a saucepan over medium high heat and cooking the meat for two minutes on each side, seasoning with salt and pepper, just until it gets some color. You’re not trying to cook the beef at all, just brown the outside. I just buy the stew beef that’s already cut up at my local grocery store, however, these are still huge pieces, so I cut them up even smaller before adding them to the slow cooker. 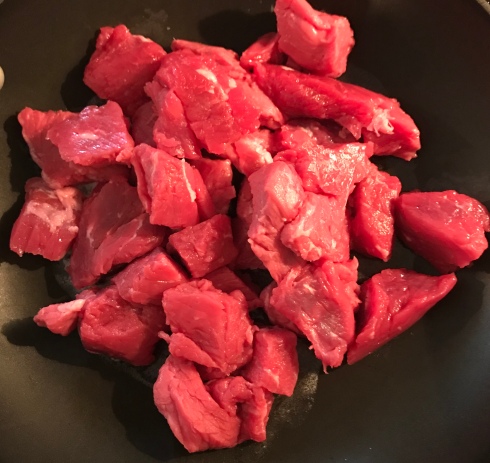 Then I add the can of tomatoes with the juice, the drained can of corn, the onion soup mix, beef broth, Worcestershire sauce, salt, pepper, rosemary and thyme to the slow cooker. The Worcestershire sauce is important because it cuts the sweetness that the sweet potatoes add to the soup.

Stir to combine all of the ingredients and turn the slow cooker on high for 6-7 hours until the vegetables, especially the carrots and sweet potatoes, are tender. Add the lima beans after 4 hours since they will not need very long to cook. 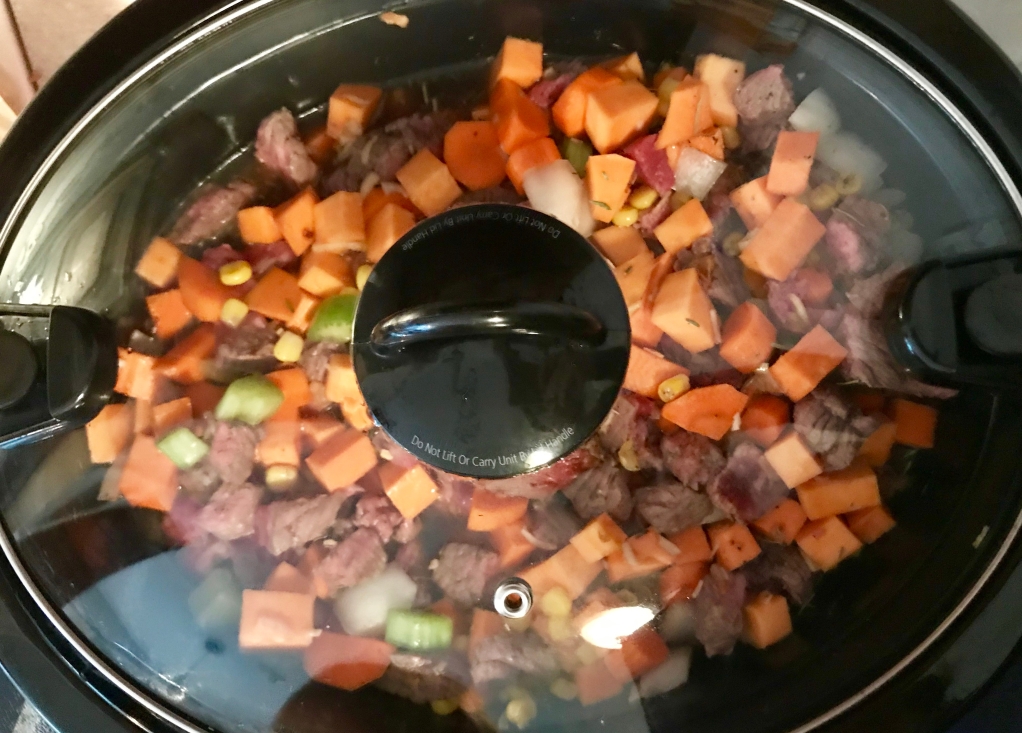 Taste before serving to adjust any seasoning to your preference. I added additional salt, but everything else was perfect for me. If you’re serving right away, garnish with a bit of parsley.

This also makes a delicious freezer meal, so eat half for dinner, and transfer the rest to a freezer ziplock bag to save for a later date. It will stay good for months! Happy meal prepping, and let me know when you try this recipe! 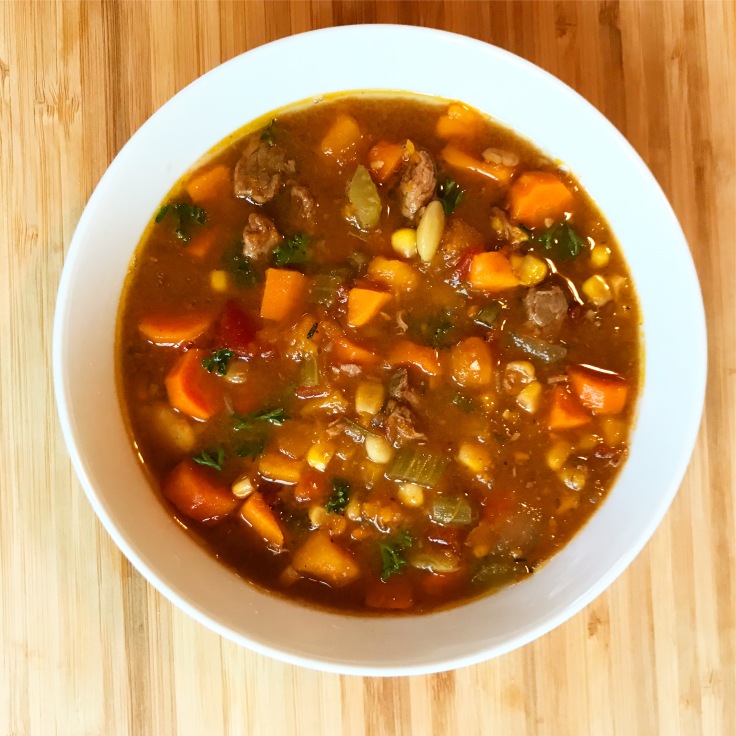 1. Peel and dice sweet potatoes and carrots into small pieces. Chop celery and dice onion. Add to slow cooker pot.
2. Melt butter in large saucepan over medium high heat. Add stew meat and brown for just a minute and season with salt and pepper, then flip and brown for another minute on the other side. Remove from heat, and cut stew meat into small pieces (I normally use kitchen scissors to cut each piece in half or thirds) before adding to the slow cooker.
3. Add tomatoes, corn, onion soup mix, beef broth, Worcestershire sauce, salt, pepper, rosemary and thyme to the slow cooker. Stir to combine ingredients. Turn slow cooker on high for 6-7 hours until vegetables are tender. Add the lima beans after 4 hours since they will not need very long to cook.
4. Taste and adjust seasoning to taste.