The newest addition to our family is one month old today, and after lots of resting and cuddling these past four weeks, I’m officially in full on “lose the baby weight” mode. I definitely let myself indulge in the occasional Saturday morning donut date with my two year old while pregnant, but if I want to be back to the body I feel comfortable in sooner rather than later, I’ve got to pass on treats like that for at least a little while. I’ve been doing intermittent fasting, lots of smoothies, and lots of walking (I’m hoping to get cleared to workout again at my 6 week follow up!).

Losing weight doesn’t have to be miserable like most people think, and one of my favorite things to do is to make lighter, healthier alternatives to those sugary treats I can’t have right now. This healthy baked donut recipe is grain free and refined sugar free. And the best part? You can make it in one bowl. With a two year old and a newborn, I have no extra time to be doing tons of dishes. 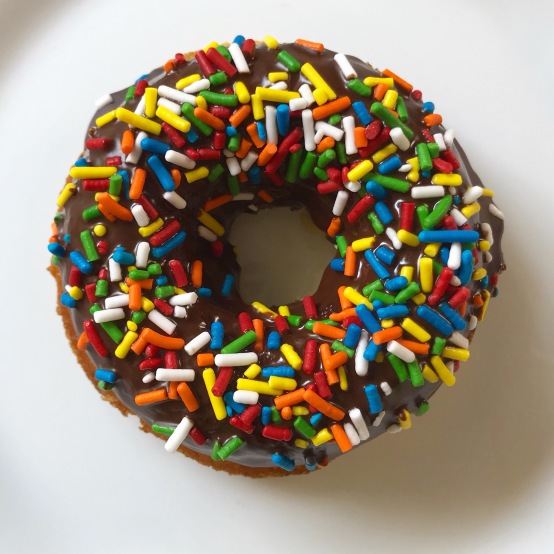 To make these donuts, begin by whisking your eggs, maple syrup, and vanilla until smooth. Then, add your melted butter (but make sure the butter is not too hot so that it doesn’t cook the eggs!). If you’d like to keep the recipe dairy free, you can easily replace the melted butter with melted coconut oil. Once well combined, sift your coconut flour, baking soda, and salt into the bowl of wet ingredients.

It may not seem like very much flour, but that’s because coconut flour absorbs a lot of liquid (hence the reason for so many eggs). Stir to combine. The batter will get very thick, and that’s exactly what you want.

If you’re looking for something a little different than a basic donut, you can add cinnamon or other spices to the batter. You could also leave out the vanilla and add cocoa powder for a chocolate donut.

Spoon the batter into a well greased donut pan, and spread each donut evenly with a spatula. If you don’t have a donut pan, you can always make these into muffins! But you can get donut pans really cheap on Amazon; that’s where I got mine!

Bake the donuts at 350 degrees for 14-16 minutes until set. Allow them to cool for about ten minutes before removing from the pan (and let them completely cool before adding the glaze).

To make the chocolate gaze, melt dark chocolate chips and coconut oil in a microwave safe bowl by warming and stirring 15 seconds at a time until smooth. I use dark chocolate that is at least 70% cacao for the health benefits. Dip each donut into the glaze and add the sprinkles to the wet glaze so they will stick. You could also use chopped nuts instead of sprinkles, or just leave them plain. After topping, refrigerate the donuts so the glaze will set.

These donuts are such a fun treat that you don’t have to feel too guilty about. Heck, you can even have two. I love to pair mine with french press cold brew and a sleeping baby 🙂

Have an awesome weekend!

1. In large bowl, whisk eggs, maple syrup, and vanilla until smooth. Then, add the melted butter and whisk to combine. Be sure the melted butter is not too hot (so as not to cook the eggs).
2. Sift coconut flour, baking soda, and salt into bowl of wet ingredients. Stir to combine.
3. Spoon batter (which will thicken significantly after adding the coconut flour) into a well greased donut pan. Smooth the top of each donut with a spatula.
4. Bake at 350 degrees for 14-16 minutes until a toothpick inserted into the center comes out clean. Allow to cool for ten minutes before removing from the pan.
5. To make the chocolate gaze, melt dark chocolate chips and coconut oil in a microwave safe bowl by warming and stirring 15 seconds at a time until smooth. Dip the donut into the glaze and add sprinkles. Refrigerate for the glaze to set.

If you’ve ever considered making your own falafel at home but wondered if it was worth the trouble, let me be the one to tell you, DO IT. These are amazing- as crispy and flavorful as any restaurant falafel I’ve ever had, not to mention super fun to make 👌 #falafel #homemade #fromescratch #meatlessmonday #vegetarian #glutenfree #grainfree #healthymom #eatclean #cleaneating #mealprep #momlife #momswhorun #runnersofinstagram #mondaymotivation #toddlerapproved #postpartumbody
Saturdays are for trying out new pie crust recipes (and for making giant, messy blueberry pop tarts to taste test said pie crusts). #homemade #fromscratch #baking #momlife #boymom #toddlermom #momswhorun #runnersofinstagram #cheatday #allthesprinkles #weekendvibes #workoutmotivation #runningmotivation #toddlerlife
Today has been A. DAY. to say the least. Our household has a sick baby, an energetic toddler, and zero sleep to run on. Today I’m thankful for our doctor’s office having Sunday hours, infant Motrin, and this dinner. I prepped the dough for King Arthur Flour’s #recipeoftheyear Crispy Cheesy Pan Pizza last night, and I’m glad I did because we’d probably be eating cereal for dinner otherwise. As I write this, I’m sitting in the nursery holding my littlest who is finally sleeping, and my husband came in to tell me that this pizza is ***very toddler approved*** 🤗 and is the highlight of his day too. Will definitely be bookmarking this recipe to make again soon! @kingarthurflour #pizzanight #sunday #momlife #momblogger #foodblogger #momswhorun #runnersofinstagram #boymom #postpartum #healthymom #homemade #familydinner
We used to be a Friday night takeout kind of family, but lately, we’re usually too exhausted to even think about leaving the house on Friday night, so it’s become a sort of “fridge clean out day” now. It’s nice to end the week with something healthy and homemade instead of something greasy just because it’s fast. Tonight Dax and I came up with this: andouille sausage with peppers, onion, mushroom, celery, and power greens in a Cajun sauce, served over rice. #homemade #fridayvibes #rainyday #eatclean #cleaneating #healthymom #healthyfamily #momlife #momblogger #foodblogger #eatyourveggies #postpartum #fitmom #momswhorun #runnersofinstagram #glutenfree
A very wet run in the rain today because I’ll pretty much avoid the treadmill whenever I can, followed by pizza night 🍕 🍳 #greens #protein #fridayvibes #pizza #homemade #healthyfood #healthylifestyle #momlife #momblogger #foodblogger #boymom #eatclean #cleaneating #postpartum #healthymom #fitmom #momswhorun #runnersofinstagram
Eat your colors 🌈 P.S. did you know black rice has more antioxidants and protein than brown rice? And it’s a fun purple color when cooked 🙃 #healthyfood #weeknightdinner #eatclean #cleaneating #momlife #healthymom #fitmom #momblogger #postpartum #momswhorun #runnersofinstagram #glutenfree #weightloss #wholefoods #mealprep #healthyeating